Christmas is my favorite holiday. It’s not just the 25th, it’s the entire season. I love Christmas music and lights, the smell of scotch tape and wrapping paper, the overwhelming stench of cinnamon everywhere you go. For me, Christmas doesn’t end until mid to late January. Perhaps this is because I have a big family and they can never seem to get together all at once. We’re often forced to extend Christmas by a few weeks so that we all have a chance to celebrate appropriately.

This year, second Christmas fell on January 5th and was in the form of a brunch. I’m a big fan of brunch because there are no limitations on food. For example, it is perfectly acceptable to eat steak and potatoes alongside hunks of cheese and fruit tarts. You can see where this post is going. That’s right, second Christmas was inevitably about the menu.

The first course (to hold everyone over because brunch is confusing and sometimes people skip breakfast) was a fennel salad with lemon juice and olive oil served over a bed of smoked Alaskan salmon. The fennel was so refreshing and unexpected and the salmon was a bonus, hiding underneath the promise of an “eat healthier” resolution. This was so satisfying, I didn’t have a chance to take a photo before the plates were half empty. That’s going to be a tough act to follow…crap.

Next up: roasted asparagus, pear crostini and filler sausage and eggs (my guests are hungry people!). I made the asparagus as I usually do, marinated in lemon juice, salt and pepper, topped with grated parmesan. Except this time, I roasted them in the oven (only rarely do I engage in open flames in my tiny apartment). For the crostini, I toasted the bread and topped with pears that had been simmering in balsamic vinegar and finished it off with a dollop of goat cheese and cracked black pepper. Strangely, they were the perfect compliment to the asparagus and are the reason I’ve been dreaming of goat cheese. 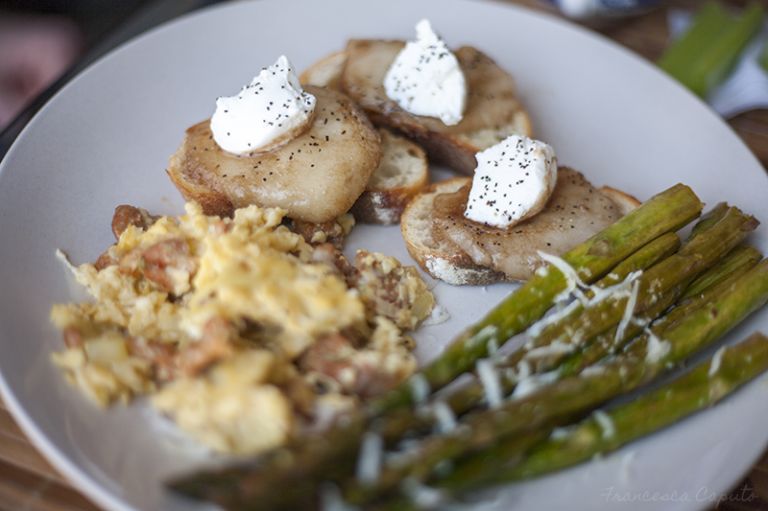 I love pancakes and usually eat them for breakfast every weekend. They are so versatile and easy to experiment with. I have been looking for an excuse to serve my lavender pancakes and justified doing so by adding a third “dessert pancake” course to our brunch. Naturally, because I wanted to be fancy, I made mini pancakes topped with butter and brown sugar (smaller portions of good food are always fancier, it gives the impression that it’s in limited supply…and that’s just fancy). I think I’m going to start making mini pancakes on the weekends because they were just so darn cute and delicious! I only wish I had a set of miniature silverware. In all my excitement, I completely forgot to photograph the fanciness.

All in all, second Christmas was a success. I encourage everyone to celebrate second Christmas…and experiment with miniature food. And when you do, don’t forget to take a photo!