Last night, after no debate what-so-ever, I grabbed a terracotta pot, filled it with charcoal and lit a fire. Meanwhile, Ben secured our fire extinguisher access. An open flame in my 300± sq ft apartment? Yes. Relaaaax, I saw this on Pinterest (famous last words of the decade). But I came prepared. Marshmallows: check. Chocolate: check. Graham Crackers: check. Chopsticks: check. Wait, what? Sure, I didn’t use chopsticks on my last camping trip but I wouldn’t dare put a marshmallow on the branches hanging from the trees in this lovely city.

I generally don’t eat s’mores but I was inclined to expand my knowledge on the subject. It was only fitting that Ace Ventura, When Nature Calls provided the soundtrack of the evening, accompanied by the storm rolling in. Four s’mores and several lonely marshmallows later, we called it a night and logically, held the charcoals out the window while pouring water on them. It went swimmingly. And just like that, the impossible became obtainable.

Here’s to making s’mores in less than ideal circumstances. 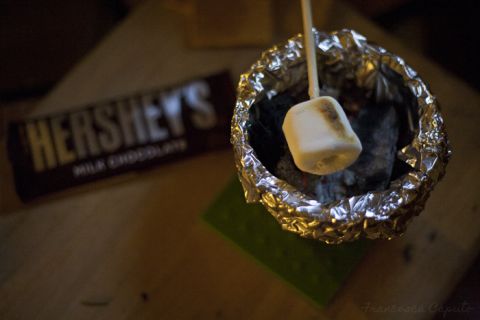