The Feast of San Gennaro

September is one of my favorite months. While I don’t like its association with the beginning of the school year, as an adult (and ex-student), I can appreciate September’s more enjoyable features without the distraction of my freedom coming to a tragic end. After 12 years in a state with only two seasons, I almost forgot what Fall looked like, yet it maintained “favorite season” status. Here in NY, the crisp air is keeping the sidewalk smell at bay and I can finally wear sweaters again because let’s face it, some people should just stay covered up. 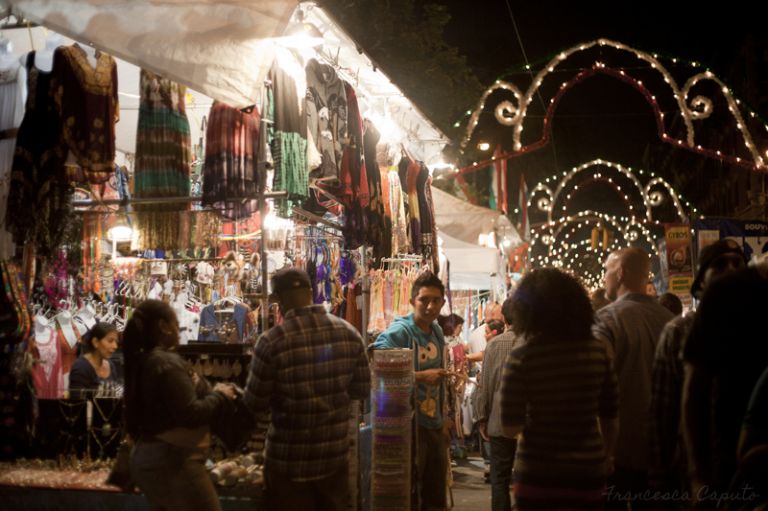 Every September, Little Italy hosts the Feast of San Gennaro. It’s mostly food venders (half of which are selling sausage and peppers) and a few novelty shops selling t-shirts that say “Fuggedaboutit” and “My cannoli is bigger than yours.” Clearly, this is how actual Italians speak…. At any rate, I was armed with a twenty and an empty stomach. Inappropriate baby clothes were the least of my interests. The first stop was food vender x. 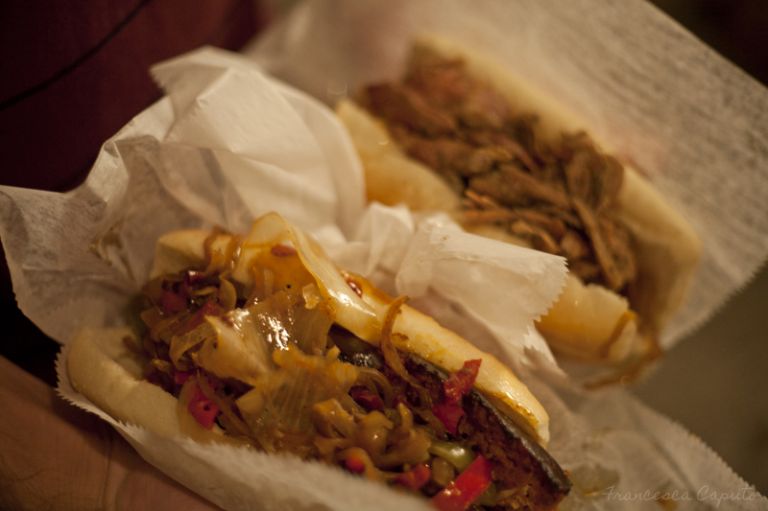 Following my precarious jaunt down heart attack lane for the entire month of July, I became uncomfortably aware of my *tiny* obsession with fatty foods, specifically pork: pork belly, pork buns, pulled pork, and let’s not forget good ol’ reliable bacon. However, out of respect/concern for my arteries, I’ve been cutting back on this death meat. Yet when it was my turn to order, I opted for the braciole. Let me clarify: the pork braciole. Slow braised meat in all its fatty juices? Don’t mind if I do! Going forward, let’s replace the words “fatty juices” with the word “magic” lest my arteries have an anxiety attack. Three bites into my sandwich and my hands were covered in magic. 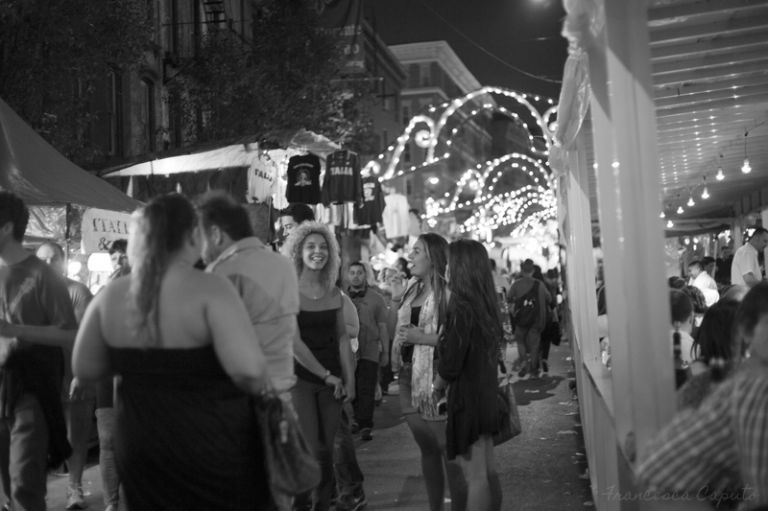 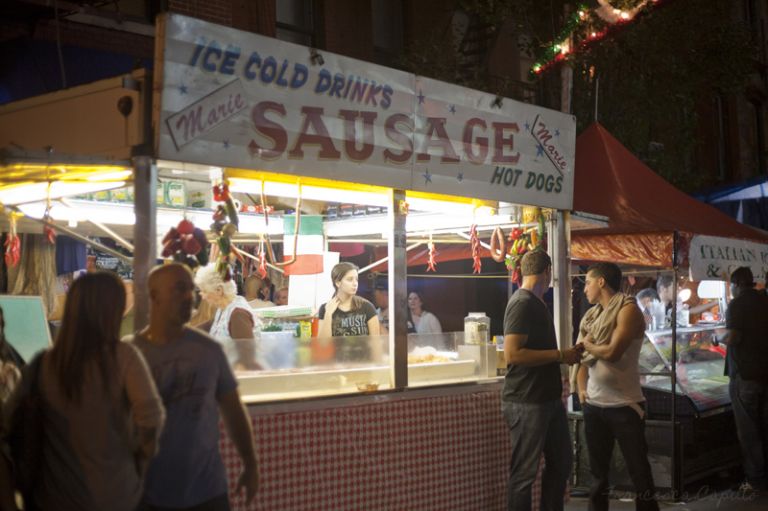 Once the euphoria of the food wore off, I noticed how crowded the streets were. And while I’ve come to terms with my vertical disability, I found myself wishing I was just a foot taller. Although, I doubt that would have kept hungry tourist heads from making cameos in my photos. So naturally, I was thrilled when the clouds began to rumble, releasing the most refreshing rainstorm. As expected, the crowd parted and I was left in the middle of the street with my trusty umbrella. I thought to myself, “what a perfect opportunity to enjoy some fried dough topped with powdered sugar.” Yes, I’m referring to zeppoli so satisfying and nostalgic, I briefly considered setting aside the entire next day to make my grandma’s recipe. 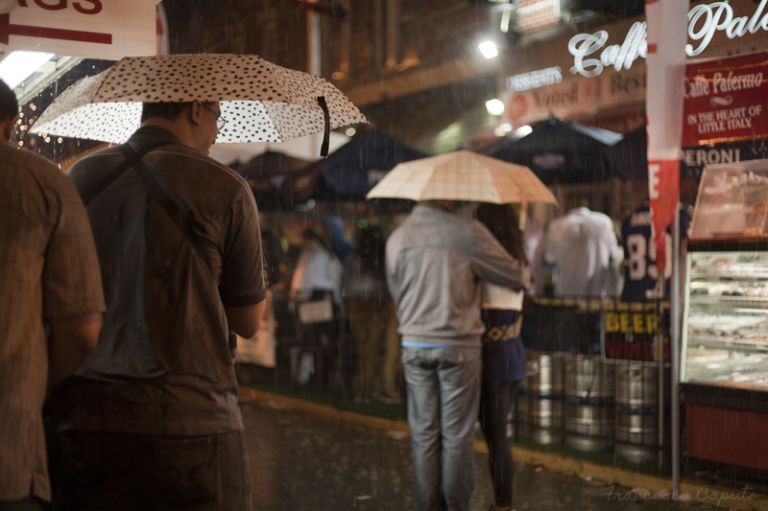 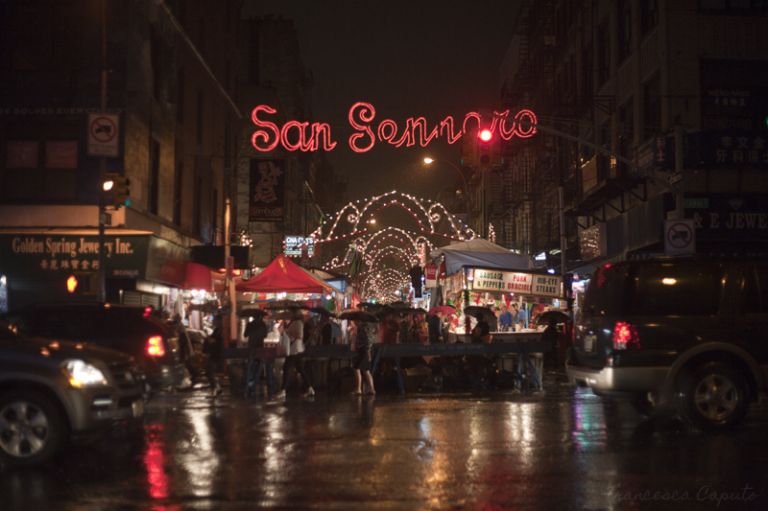 Before retiring to my apartment at the wee hour of 10:30pm, I indulged in a predictable cannoli and chamomile tea from Caffe Roma. I say “predictable” because this is my go-to dessert in the city regardless of its merit. When I was 14, I begged my uncle (a restaurant owner at the time) for a case of cannoli cream for my birthday. He refused, like any responsible adult. The moment it became “forbidden” I put this delicious, creamy luxury on a pedestal, eating it every chance I got. This particular cannoli did not disappoint.

Safely home underneath my down comforter, I wished I had brought some pastries home. The thought was short lived and I began counting chocolate covered biscotti before drifting off to sleep.